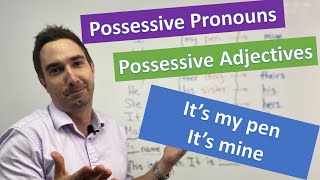 In this video, we discuss Subject and Possessive Pronouns, as well as how to use Possessive Adjectives.

We can also replace a possessive (ie: Matt’s → his).

Add your example sentence below ↓↓↓↓↓

Send us a message