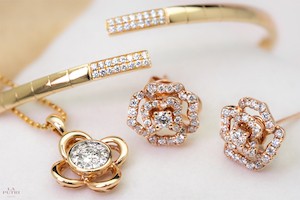 A friend of mine sent me a message the other day and asked me whether it was “jewellery” or “jewelry” as she was making some posters for her business.  That got me thinking, and I was pretty sure that both were okay!  Having grown up in Canada, I was always subjected to both British and American spellings.  Spelling “color” or “colour” was also interchangeable and both were taught in my classes.  We never said or used words like “lift” instead of elevator or “rubbish” instead of garbage, but the spellings were always taught using British and American English.  Is it “organize” or “organise”?  Even as I type this, the version with the z, or the -or (without the ‘u’) are underlined with a red squiggly, suggesting that they are wrong, even though both are accepted.   I think as a Canadian it was always a blessing that we were able to learn both, but it does get confusing to say the least.  Luckily, for English learners, in the end it doesn’t matter which version you choose.  Most teachers will just suggest that you choose and stick to either British or American, and that’s it!  To answer the question of “jewellery” or “jewelery”, I went to google and found the following from grammarist.com.

“For the noun referring to articles, especially of gold, silver, or precious stones, used for personal adornment, jewelry is the preferred spelling in American English. Jewellery is preferred in varieties of English from outside North America. Both spellings appear in Canadian English, but jewelry prevails by a two-to-one margin.

The spelling difference extends to jeweler (American English) and jeweller (British and Australian English), as well as to other derivatives such as jeweled–jewelled and jeweling—jewelling. But jewel (not jewell) is the standard spelling in all varieties of English.

The simpler, American spelling of the word is part of the legacy of Noah Webster, the early-19th-century educator and lexicographer, best known for his 1831 dictionary, whose attempts to reform the language met with varying degrees of success. He didn’t originate the jewelry spelling, but he was instrumental in making it a part of the American language. The ngram below, which graphs occurrence of the two forms in a large number of American books published from 1800 to 2000, suggests that in this case his influence was immediate and permanent.”

Send us a message